There are scenarios where you may need to transfer an existing instance between Availability Zones (also called zones or AZs). Examples of these scenarios include:

Unfortunately, live migrations between zones are currently not possible. Instead, migration is accomplished by shutting down the current instance, creating a snapshot, and starting a new instance in the new zone from the snapshot.

A side-effect of this process is that there is usually no way to keep the old IP address. If you have an allocation for advanced networking, and already have a floating IP associated with the instance you intend to migrate, then it is possible to keep the reserved IP address by re-associating it with the new post-migration instance. In all other situations it is simply impossible to keep an IP address, and so you will need to accept a change of IP address when migrating between AZs.

Although the basic process is straight forward, some scenarios have complicating factors, such as different types of storage associated with the instance, or advanced networking requirements. These complicating factors do not usually prevent a migration, but they will need to be taken into account and planned for.

The rest of this document provides:

The simplest scenario: no storage, no complicated networking, no database services

Even if you have a more complicated situation, the simplest scenario offers a useful case study that highlights the most important parts of a migration. If you have a little spare room in your project, you could spin up a small instance for testing, and then treat this first section as a tutorial or practice run.

In particular, you will need to choose the Security Groups and Flavor from scratch.

You should also make sure you know which SSH keys were installed into the original instance. If you are happy with the existing keys, there is no need to add them again to the new instance. However, you will have the option of adding new ones if you wish.

You can get most of the information you need from the detailed information page for the instance.

Select the required instance at https://dashboard.rc.nectar.org.au/project/instances/, or navigate the dashboard menu using Project → Compute → Instances. Once you are on the Instances page, click on the instance you intend to migrate. Here is a screenshot of the detailed information for an instance:

You can see that the Instance Overview includes useful information (highlighted) needed for the migration, such as the Flavor and Security Groups.

This screenshot also shows a potential complication to consider: this instance is running on a Flavor that offers ephemeral storage.

For this scenario, it is important to confirm that you are not using any ephemeral storage before you proceed.

Step Two: Shut Off the Instance

Although live snapshotting is possible, we advise you to shut off the instance before you snapshot. This will help ensure your migration goes as smoothly and quickly as possible.

You need to wait for the instance to shut off. The Task column will say Powering Off. Eventually you will end up with a Status of Shutoff and a Power State of Shut Down:

Step Three: Create a Snapshot of the Instance

Once the instance is shut off, select Create Snapshot from the Actions menu:

Start the snapshotting process by entering a descriptive name and clicking the Create Snapshot button.

This is the most time-consuming part of the migration procedure. It is worse for instances with large Disk space, but even a small instance requires some patience.

Step Four: Launch a new Instance from the Snapshot

Clicking Launch will bring up the dialogue for launching instances.

On the Details tab, enter an Instance Name and select the required Availability Zone. You may want to select an AZ that is only available to your institution, or one that is geographically close to your location.

On the Flavors tab, select a flavor with sufficient capacity for your instance. To select m1.small as used by the original instance, use the filter area, then click the selector button (up-arrow) for the m1.small flavor to allocate it to your instance.

On the Security Groups tab, be sure to allocate the same security groups you noted earlier, HTTPS, SSH, and default in this example.

On the Key Pair tab, select the required key, or add a new key if you wish.

Click the Launch Instance button to launch. It might take a some time but if you go back to the Instances page, you should eventually see the new instance running in its new home:

You should now be able to SSH into the new instance using the new IP address which is displayed on the Instances tab, using the required key and username.

In the flowchart, you can skip any circles that don't match your situation. Everyone will need to do the light blue, green and orange circles (respectively start/end, prepare/communicate/test, shutdown/snapshot/relaunch). Many people can skip purple, pink, dark blue and grey (database stop/start, ephemeral data backup/restore, disassociate/re-associate floating IP, detach/reattach volumes).

At minimum, repeat Step One from the introductory tutorial in Section One. Other information that you should collect, especially if you know that you have a more complicated situation, includes:

Using the Volumes filter area to identify volumes attached to an instance and their mount points.

Once you have all this information, you should have a good understanding of what is needed to complete the migration, and how everything fits together.

One more thing to remember is that if there were any resources such as a volume quota that you needed to apply for in one zone, you will probably need to apply to the Node controlling your new zone for more of that quota.
Some zones might not even offer the type of quota you are looking for, so you should request the quota as soon as possible in case there are additional complications.

Backing up and restoring ephemeral storage

NeCTAR has existing documentation that covers this topic:

Although a snapshotting option exists for volumes as for instances, each volume snapshot is usually constrained to a single zone. This means the solution that works for instances will not work for volumes.
If you really need to transfer the contents of a volume from one zone to another, you need to make sure you have a volume storage allocation at both regions, and even then your options are limited. (In particular, it is not usually possible to do it using the NeCTAR dashboard.)
You can try using the Cinder API client; some of the existing documentation will point you in the right direction:

Some locations even have a Cinder Backup option available in the dashboard.

Even when Cinder options exist, it is usually best to do the following:

Shutdown the instance bifrost-mel in the usual way.

Next, create a snapshot bifrost-mel.

Then go to Project → Compute → Images and launch a new instance from the bifrost-mel snapshot. You may reuse the same name if you wish, but we are using bifrost-uom to avoid any confusion. When creating the new instance, remember to set the Security Groups, and select melbourne-qh2-uom in the Availability Zone list. If you use the same name here as the original instance, you should make a note of the new instance's ID. You will need this in the next step to tell the difference between the two instances.

Attach test-vol to the new instance.

Instances that boot from Volumes

If the instance you are migrating boots from a volume, the procedure will usually be the same as for a regular instance.

You should be aware that if you selected Delete Volume on Instance Delete when creating the old instance, then you will lose the volume once the migration is complete. However this is not prohibitive: you can still shut the instance down (without deleting it), snapshot it, and boot a new instance from the volume snapshot. Alternatively, create a new volume from the snapshot, and boot from the new volume.

Regardless of whether or not you selected to delete the volume when the instance is deleted, you won't be able to create a new instance directly from the old volume while the old instance is still running.

If you did not select Delete Volume on Instance Delete then you can do the migration slightly more efficiently so long as the volume is accessible from the new Availability Zone. You can terminate the old instance, the volume will retain the latest state of the instance, and you can boot a new instance based on the volume. This is the case, for example, if migrating from melbourne-qh2 to melbourne-qh2-uom.

If the volume is not accessible from the new AZ, a lot more work is required. You need to create a copy of the existing volume, create a new volume in the new AZ, create an instance in each AZ, attach each new volume to each new instance, transfer the data over using the usual methods like rsync, and if all that goes according to plan will you be able to boot from the volume in the AZ. Step by step:

The following flowchart illustrates the above instructions: 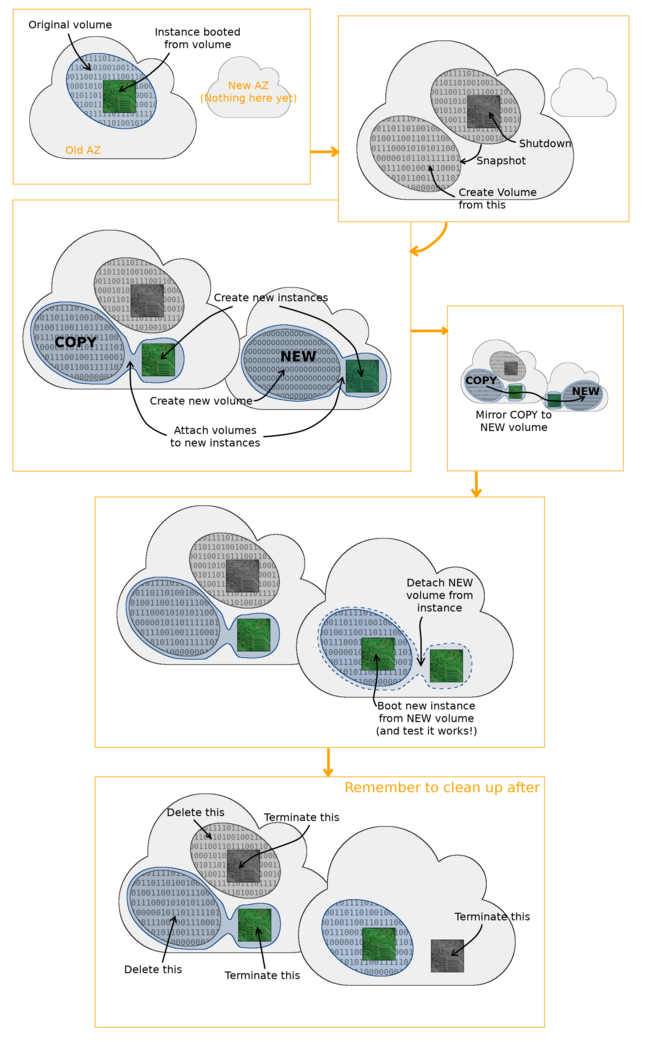 It would be fair to ask why it is so complicated. It has to do with the fact that the old volume is permanently attached to the original instance that booted from it, until that instance is deleted. Even when you shut the instance down, you can't reattach the volume to some other instance just to do the data transfer. The only alternative methods might be one of the following:

Therefore, while the prescribed method has more steps, it is the safest option and will work for everyone.

If you have an allocation for Private Networking and Floating IPs, the procedure is similar to migrating with volumes, but easier:

More information about advanced networking and floating IP addresses is available via the following links:

If your instance requires access to any external services that have firewall or whitelisting rules in place, you will need to get in touch with them after you migrate the instance to update them with the new IP address. This is not something NeCTAR can usually provide support for.
Likewise, if your old instance was associated with a domain name, you will probably need to log into the domain name management dashboard provided by the domain name provider and switch the IP address in all the required fields.

Many proprietary software licenses depend on being able to keep the same MAC address, which will by default be lost when moving to a new instance.

If you need to move between Availability Zones and have such a proprietary license, many of the above steps will be similar, but you will need our help to copy over the MAC address for you. Therefore, if you are in this situation, even if you are an advanced user who feels comfortable with all aspects of the process, you will need to get in touch with the helpdesk (details below) and organise the MAC address transfer. Do this first before undertaking any other parts of the migration process.

If you run into problems or need to ask questions

As with any other occasion when you require support for managing your NeCTAR project, you may send an email to support@ehelp.edu.au.
You may also open a ticket or start a chat via https://support.ehelp.edu.au/support/tickets/new